The Detective is Already Dead Wiki
Register
Don't have an account?
Sign In
Advertisement
in: Stubs, Articles with Spoilers, Characters,
and 5 more

After transforming into a humanoid chameleon, he becomes bigger, gaining a much scarier appearance and growing a large and long tail with sharp teeth. Furthermore, Chameleon grows even much larger in size after another transformation which makes his head resemble to that of a T-Rex. 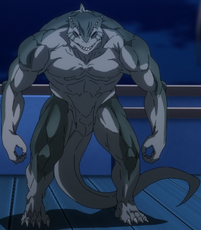 Chameleon after transforming into a humanoid chameleon.

Chameleon's head resembles a T-Rex's after his another transformation.

Chameleon can be somewhat cunning and manipulative, making his opponents act out of rage. He enjoys seeing people suffer and tends to poke fun at his enemies whenever he pushes them to their limits.

Chameleon possesses the ability to completely turn invisible to humans' eyes. He can transform into a humanoid chameleon and even a larger creature with a head resembling that of a T-Rex. In those forms, he gains physical attributes, tough skin, and viciously brute strength.

Chameleon is a very sneaky individual as he can easily sneak through without being noticed due to his chameleon characteristics.