The Detective is Already Dead Wiki

The Detective Is Already Dead season 2 is in production.

Check out the PV here!!!

The Detective is Already Dead Wiki
Register
Don't have an account?
Sign In
Advertisement
in: Stubs, Articles with Spoilers, Characters,
and 2 more

View source
watch 01:36
We're Getting Mutants in the MCU - The Loop
Do you like this video?
Play Sound

Kimihiko Kimizuka (君塚君彦, Kimizuka Kimihiko?) is the main protagonist and one of the main characters of The Detective Is Already Dead series. He is an 18-year-old high school student who became Siesta's assistant after a hijacking incident four years prior to the main story. After Siesta died, he wanted to start living a lethargic life. Until he receives a request from Nagisa Natsunagi.[1]

Kimihiko is an 18-year-old high school boy with an average look. He has short black hair with slightly long bangs and has amber, golden eyes. Kimihiko is normally seen wearing a black suit and a white shirt under. 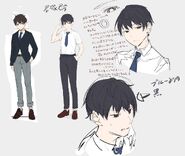 Kimihiko is known to be a magnet for trouble and because of this, he's able to think things clearly even in the most perilous of situations.

According to Siesta, Kimihiko is not suitable for combat and his stamina is weak.

According to Siesta, Kimihiko is very intelligent, but still inferior to her.