The Detective is Already Dead Wiki
Register
Don't have an account?
Sign In
Advertisement
in: Stubs, Articles with Spoilers, Characters,
and 3 more

Mia Whitlock (ミア・ホイットロック, Mia Hoittorokku?). A priestess dressed in a white robe and scarlet hakama. Illuminated by the dying rays of the setting sun. One of the world's protector, a Tuner, who reigns over the clock tower.

Mia has long light blue hair tied in a low ponytail with some part of her hair on her side of her face. She can be seen wearing a head piece too. Her eyes is light pink color. She is wearing white robe and a scarlet hakama. As for her footwear, she simply wears red color sandals with white tights. 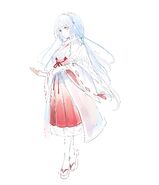 When it is revealed that she could foresee the future, her parents used her to make money through 'believers', which ultimately resulted in their deaths because of one of the believers. After another series of events, she then is taken care of by Siesta.

Mia, as the <<Priestess>>, has the ability to foresee the future world crises, which from there, like all previous <<Priestesses>>, uses it to write the <<Bible>>.